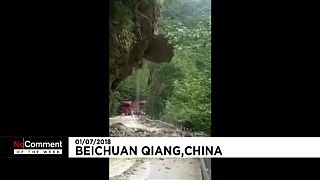 San Fermin protests and rotavator racing: No Comments of the week

A rain-triggered landslide cut off a local road in Beichuan Qiang Autonomous County, in southwest China’s Sichuan Province on Sunday.

Meanwhile, in Europe, Greenpeace said it crashed a Superman-shaped drone into a French nuclear plant to highlight its vulnerability to external attacks.

And in Rome, the environmental NGO protested plastic pollution with a life-sized whale sculpture outside the Pantheon.

Animal rights activists staged a protest against bullfighting ahead of Pamplona's San Fermin festival famous for its running of the bulls.

Dolphins predict that Russia will win its game against Croatia and advance to the semi-finals.