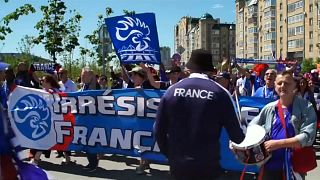 Australian and French fans arrived at the Kazan Arena on Saturday to see the Socceroos taking on Les Bleus.

Both set of fans were predicting victory for their respective fans as they were chanting and dancing their way to the stadium.

France and Australia are playing the first Group C game with Peru and Denmark facing off later in the day.