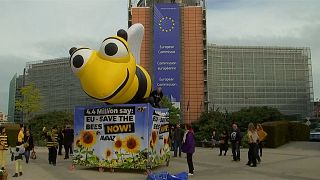 The use of neonicotinoids in the EU has been restricted to certain crops since 2013, but environmental groups have called for a total ban, which sparked a debate across the continent about the wider use of chemicals in farming.

Activists from Avaaz, an online activist network, and protesters gathered outside European institutions in Brussels, describing the decision of EU governments as a "beacon of hope" for bees.

Dressed up as the insect and accompanied by a giant inflatable bee, they celebrated the decision singing and dancing at a square near the European Council and the European Commission buildings.