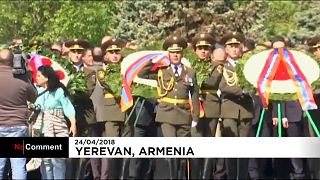 Thousands of people gathered in Yerevan on Tuesday to lay flowers in commemoration of the mass killings of Armenians by Ottoman Turks a century ago.

The mass killings and expulsions of around one million Armenians between 1915 and 1917 is view by many historians as the 20th century's first genocide.

This year's remembrance day falls a day after former President Serzh Sargsyan resigned from his new post of prime minister.