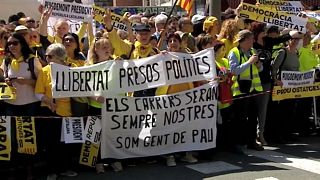 Rally in Barcelona to demand the release of jailed separatist leaders

Hundreds of thousands of people turned out for a rally in Barcelona on Sunday to demand the release of high-profile secessionist leaders being held in pre-trial detention.

Protesters waved Catalan separatist flags behind a huge banner that read "for rights and liberties, for democracy and unity, we want them back home!"

The demonstration was organized by two pro-independence grassroots groups, the National Catalan Assembly and Omnium, whose presidents are among the nine separatists in prison awaiting trial for their role in last year's failed breakaway bid by the northeastern Spanish region.

It is estimated that more than 300.000 people participated in the protest.