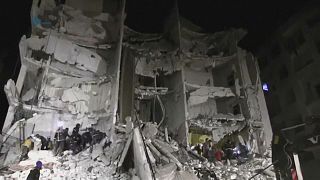 The death toll from an explosion in the rebel-controlled Syrian city of Idlib rose to at least 19 on Tuesday, the Syrian Observatory for Human Rights said.

Thirteen of those killed in Monday's attack were civilians, according to the British-based war monitoring group.

Video uploaded to the internet by the civil defence group known as the White Helmets purported to show two children being rescued alive from the rubble in Idlib. A child was seen being rushed to a waiting ambulance, and then the video appeared to show a child being treated at a field hospital.

A second video purported to show workers searching through the rubble of a damaged building. The Observatory said that a number of people are still missing and the death toll is expected to rise, adding that the cause of the explosion was unclear.