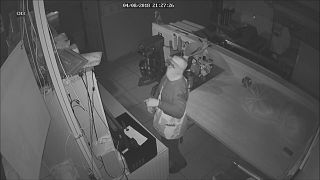 Was it a case of temporary amnesia? A Florida doughnut shop burglar hit his head and then forgot to take the register he intended to steal in an April 8 heist.

Port St Lucie police released surveillance footage of the burglary in an attempt to identify the suspect. The burglar enters the Dixie Cream Donuts by breaking out the glass in the door before he then takes items from under the front counter and from the back. He then struggles to remove the register, nearly knocking the counter and a tray of doughnuts to the floor.

But on his exit, he hits his head on a part of the door and drops the register. He picks up everything except the register before making his getaway.

The burglar isn’t seen taking any doughnuts during the heist.