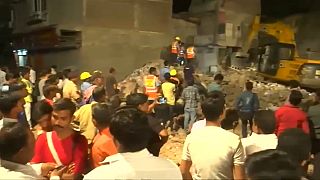 At least ten die as car brings down building in India

At least 10 people were killed and several others injured after a four-storey building collapsed in India's central Madhya Pradesh state on Saturday, (March 31).

The incident occurred at around 1550 GMT after a speeding car rammed into the building in Indore city. The building, which housed hotels and lodges, was old and in dilapidated condition.

Rescue teams and police personnel were at the site and excavators were brought in to clear the debris and extricate people trapped underneath.

State Chief Minister Shivraj Singh Chouhan announced compensation of $3,000 for the family of the deceased and $768 for the injured.