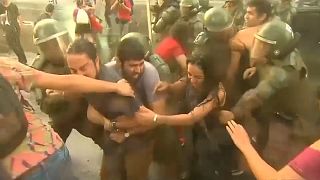 Demonstrators clash with police in Chile over for-profit school ruling

Police clashed with student demonstrators in the streets of Chile's capital Santiago on Tuesday after a constitutional court overturned a law that would have banned universities operating for profit.

The decision dealt a blow to free tuition reforms brought in by former centre-left president Michelle Bachelet. With a close vote of six to four, the court ruled in favour of a group of private universities that argued Bachelet's measure was unconstitutional.

Student protesters also argue that attempts by Bachelet and her successor, conservative billionaire Sebastian Pinera, to improve quality and access to higher education have been insufficient.