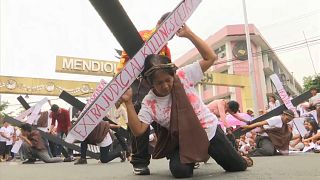 More than a hundred protesters held a Lent-themed demonstration in Manila on Tuesday, accusing Philippine President Rodrigo Duterte's administration of being anti-poor.

Protesters simulated a 'religious' procession carrying crosses, each of which addressed one of Duterte's policies. In the crosshair was the country's justice system, tax hikes, resettlement issues and extra-judicial killings.

The protest was held in time for Holy Week, a seven-day religious occasion widely celebrated in the predominantly Catholic country.