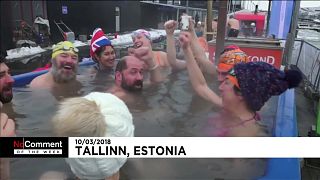 We kick off a look at the week’s best videos in Tallinn, the capital of Estonia. The city played host to the 2018 Winter Swimming World Championship and it wasn’t for the faint-hearted: water temperatures were hovering around freezing!

You would have to be cold-hearted not to be touched by this popular video that emerged over the last week. It is drone footage of the destruction inflicted upon the Syrian city of Aleppo.

Meanwhile in Argentina an ice bridge spectacularly broke off from a glacier in Argentina's Patagonia region — a cyclical phenomenon that attracts thousands of tourists.

The glacier, a massive tongue of ice in the Santa Cruz province that covers 250 square kilometres, advances yearly into a lake, known as Lago Argentino. As the glacier moves forward, it cuts off a river feeding the lake. Water builds up pressure and slowly undermines the ice, forming a tunnel until ice comes tumbling down. The last rupture was in 2016.

In Thailand scores of elephants were treated to a special fruit buffet to mark the animal’s special day. March 13 is Elephant Day, a national initiated by wildlife conservationists to remind Thai people of their significance of elephants. It also serves to educate people to help support efforts to protect them from poaching.

In the US students from more than 3,000 schools left their classes to demand greater control over the sale of firearms. It was to mark a month since a gunman killed 17 people at a school in Florida.