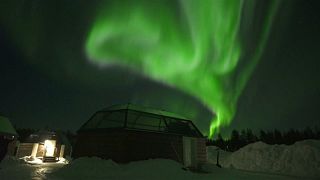 A magnificent display of the northern lights appeared over the skies of Lehtojarvi, on the Arctic Circle in Finland, on Thursday (February 28).

Guests at the Arctic Snow Hotel, near Rovaniemi, admired the show which lasted for several hours and coloured the sky with green, pink, purple and white lights.

Spring is one of the best times to see the northern lights - also called aurora borealis - on the Arctic Circle because of augmented solar wind activity.