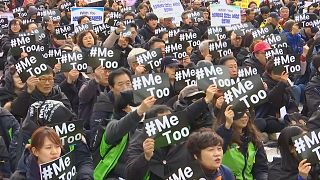 About 100 members of Young Women's Christian Association (YWCA) marched in the tourist area of Myeongdong in central Seoul and held up placards such as #MeToo and #WithYou, while chanting "We are with you", "You are not alone". Meanwhile, hundreds of other civic group members including women's labour unions held a separate rally in the city's landmark, Gwanghuamun square.

Allegations of sexual assault against a rising star in the ruling Democratic Party, levelled by an aide in a dramatic television interview earlier this week marked a new moment for the #MeToo movement in South Korea.

In response to mounting public outrage, the government said it plans to extend the statute of limitations for power-based sexual abuse cases, and the labor ministry would set up a process for victims to anonymously report sexual harassment at their workplaces.