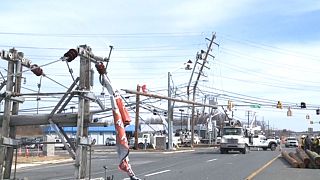 At least seven people were killed and over 2 million households cut off power by a ferocious storm that hammered northeastern United States with powerful winds, relentless rain and historic flooding.

At least seven people were killed and over 2 million households cut off power by a ferocious storm that hammered northeastern United States with powerful winds, relentless rain and historic flooding.

The Storm Riley slammed New York and New Jersey with heavy snow and strong winds while bringing high waves to Massachusetts with a threat to coastal residents. Over 200 national guards joined a rescue operation and over 1,800 people were evacuated.

Virginia and Maryland declared a state of emergency on Friday as severe winds and heavy rain battered the East Coast.

The seven deceased, including two children, were killed by falling trees.

On Saturday morning, numerous roads across the region were still closed due to debris, fallen trees and power lines. Rail service across the Northeast was also impacted significantly with Amtrak suspending all service on the Northeast Corridor line.

There were still 2.3 million customers without power in 12 states across the northeastern America on early Saturday.

In Aberdeen, a town in northeastern Maryland, a large number of utility poles were broken or toppled along Route 40. One lane of the road has been closed on Saturday.

"No electricity now. They say two or three days [for power to resume normal]. I'm 58. I've grown up around here. It's the worst I've seen in 58 years since I've been around," said a power maintenance technician in Aberdeen.

On Sunday, the storm is gone and winds will be even calmer, according to the U.S. National Weather Service.