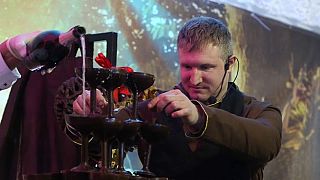 What's your guilty pleasure? When it comes to food and drink, two answers will likely top the list: chocolate and wine.

But one foodie in Croatia has combined the two, and on Saturday he featured his creation at a gastronomy festival in the village of Brtonigla.

This year, his stall at the Choco & Wine Fest was swarmed by visitors eager to sample his sweet treats.

The annual food festival has been held in Istria, a peninsula in the northern Adriatic, for six years.

Famed for its rolling hills, sandy coastline and Venetian architecture, the green oasis is a tourism hotspot, attracting over 100,000 tourists last year.

But Michele Babic, the head of the local tourist board, says the chocolate and wine festival has also helped put the village of Brtonigla on the map.

"This is the festival that combines wine and chocolate. And why (do) we do that? Because Brtonigla is a wine destination and we tried to make some festival to combine wine with something."