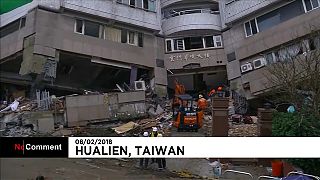 Progress in the search and rescue operations has been slow at the worst-hit building in Taiwan's Hualien County, where a 6.5-magnitude earthquake has killed 10 and injured over 260 others.

As of 14:00 Thursday, 25 people had remained missing. Many believed they are trapped in the tilting Yun Men Tusi Ti building.

The search and rescue operations were halted at one time Wednesday evening as the building kept tilting, posing a threat to both the rescuers and the people that might be trapped in it.

Rescuers propped up the building with 10 steel bars as instructed by local civil engineers to protect the building from falling further amid frequent aftershocks.

"The current situation is stable. I think there would be no problem if there are only normal aftershocks. But it would be hard to enter the building if another aftershock bigger than the main quake comes. No one can guarantee that it will not come," said Huang Wu-lung, civil engineer in Hualien.

The building is tilting seriously with the interior structure collapsed. Rescuers said it is hard for them to enter the building. In order not to hurt the trapped, the rescuers have resorted to bare hands to dig into the rubble instead of using large machinery.

"Because these people might be safe in certain areas or in a coma or something. So we can't use large machinery for fear that the people there might be harmed if the machinery happens to damage or collapse the structure," said rescuer Wang Ming-chung.

Rescuers said despite the continuous aftershocks, they have never given up hope and will work harder to speed up the operations.