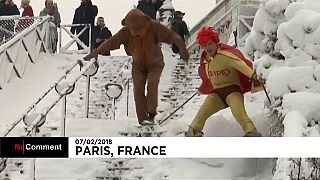 Already at 12 centimeters in Paris, and expected to rise, the snow has halted bus services in the capital, and rail operator SNCF was forced to slow down trains on several of its high-speed TGV lines.

The weather also caused turmoil to many citizens' daily routines, as numerous departments suspended school transport, while truck drivers in the southern Paris suburb of Essonne were forced to spend the night on the side of the road, after traffic was banned for vehicles weighing over 7.5 tonnes both there, and in other parts of the wider Paris region.

The Meteo France weather service has placed 27 departments in the country on orange alert, and expects the snowfall to cease mid-Wednesday, before potentially restarting on Wednesday night.

Not everyone was put off by the snow however, with Parisians gathering to ski down the fresh snow in front of the Sacre-Coeur in Montmartre.

The icy weather is a stark contrast from January's mild and rainy weather, which led to severe flooding and swelling of the Seine river.