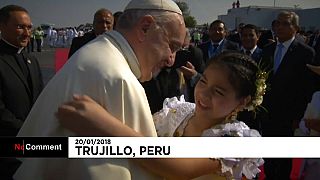 On his penultimate day in Peru, Pope Francis flew north to Trujillo, a city near the Pacific Ocean, to say Mass for about 200,000 people on the beach at the nearby oceanside town of Huanchaco.

Trujillo, capital of the region of La Libertad, was hit by major floods after six landslides in less than a week at the beginning of 2017, leaving tens of thousands of people homeless. The vast majority of people affected were poor.

The disaster was caused by the climatic phenomenon called Nino Costero, a warming of surface waters on the Pacific Ocean that generates intense rains on the coast of South America. Scientists have said climate change will make El Ninos more frequent and intense.

"You know the power of nature, you have experienced its force," Francis said. "You had to face the brunt of the 'Nino Costero' whose painful consequences are still present in so many families, especially those who are not yet able to rebuild their homes".

Francis, who has often warned about the effects that climate change has on the poor, wrote a major document in 2015 on the need to protect the environment in which he backed scientists who say climate change is at least partially caused by the burning of fossil fuels.

In his homily, Francis also mentioned increasing violence in the Trujillo area, where there have been hundreds of murders related to drug trafficking.

Thousands of people spent the night on the beach in tents and sleeping bags waiting for the pope.