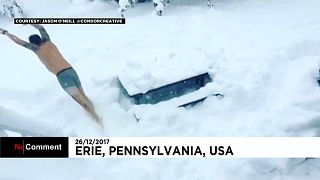 A record breaking amount of snow has fallen in the US.

A record breaking amount of snow has fallen in the US.

In Erie, Pennsylvania 165 cm of snow has fallen within a single week.

In Chicago temperatures have plummeted to -3 Fahrenheit or - 16 degrees Celsius.

For drivers, ice on the roads has been treacherous. In Boise, Idaho Police closed the interstate after a dozen cars crashed into each other.

But this hasn't meant people aren't taking advantage of the unusual weather.

Videos posted on social media showed the ways people have been enjoying themselves such as diving into snow from rooftops. It looks like a fun sport – and perhaps might be included in the upcoming Winter Olympics!