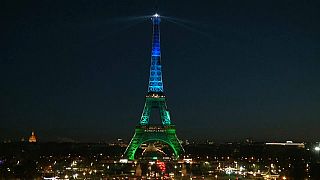 Paris monuments including the Eiffel Tower and the Sacre Coeur were lit up in blue and green for the end of the Paris climate summit on Tuesday (December 12).

The illuminations -- powered by electricity generated from vegetable oil in a nod to clean power -- marked the end of the summit of world leaders and actors in climate change which focused on climate financing.

French President Macron was expected to take in the sights with a boat trip along the River Seine with a group of children after the closing speeches.