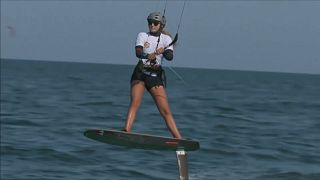 At just 16 years old, Morz led the field throughout the tournament, finishing 27 points ahead of Russia’s Elena Kalinina.

“I never imagined I would have two world titles by the time I was 16,” Morz said.

“I’m just really excited, really happy,” she said, adding all the wanted now was to push her limits even further.

Parlier wrapped up the men’s event with a race to spare after he overtook Britain’s Oliver Bridge on the second day.

“Right now the level is crazy high and we’re going really fast, and I like it because the sport is going up,” he said. “(At) every event people are getting faster and faster, so it’s really interesting.”