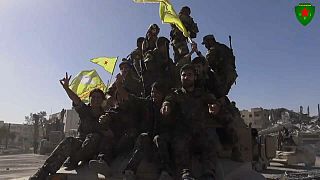 Kurdish men and women are celebrating their victory, riding around on armored vehicles in al-Naim Square.

“Last night the al-Naim square was liberated, and today the stadium is fully liberated from the terrorists, and we will raise the flag of YPG, and shortly Raqqa will be declared liberated,” said one fighter.

Dozens of militants who refused to surrender made their last stand earlier in the stadium, which had become notorious as an ISIL prison and dungeon complex after the Islamic militants outlawed sports. The US-backed SDF forces planted a flag at the centre of the pitch.

The fall of Raqqa, where the so called Islamic state had staged celebrations of its string of victories in 2014, is now a symbol of the jihadist movement’s collapse. Syrian Democratic Forces (SDF) and Kurdish militias, backed by a U.S.-led international alliance, have been fighting Islamic State inside Raqqa since June 2017. It’s loss is a major defeat for the dying extremist group that had proclaimed it to be the capital of its “caliphate.”

Although clashes in Raqqa have ended, a spokesman for the US-led anti-IS coalition said pockets of the militants still remained there.