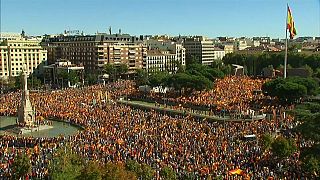 Updated: 07/10/2017
<p>More than 50,000 demonstrators from across Spain gathered in Madrid’s central Plaza de Colon.</p> <p>Protestors chanted slogans both in favour of Spain and the country’s constitution and repeatedly shouted “Long live the Guardia Civil” and “We’re proud of our police”. </p> <p>Both forces were strongly criticised for their brutal tactics in last week’s pro-independence referendum in Catalonia, in which hundreds were injured.</p> <p>Whilst the Madrid demonstration is the biggest pro-unity show of strength since the Catalonia crisis reached a head last week, much smaller but more numerous protests – roughly 50 – in favour of dialogue with the Catalan ‘independentistas’ simultaneously took place across in cities and towns across Spain.</p>
no comment