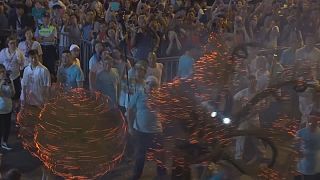 Hundreds of performers carried a giant fire dragon through the streets of Hong Kong on Wednesday (4th October) as part of the mid- Autumn festival.

The performers carried a 67 metre long fire dragon through the streets of the Tai Hang district.

According to tradition the giant fire dragon was used to defeat a plague in the 19th century.

Thousands of tourists and residents celebrate the ritual for three days from the eve of the mid- Autumn festival.