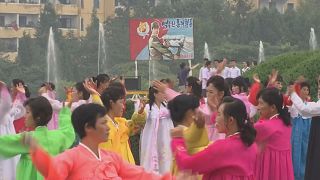 A national exhibition of Korean clothing has opened in the North Korean capital Pyongyang.

A national exhibition of Korean clothing has opened in the North Korean capital Pyongyang.

Presented at the exhibition on the theme of “Our cloth and our dress” are more than 700 pieces of various men’s and women’s Korean dresses called “hanbok” in South Korea.

Most ‘hanbok’ are made in bright, vibrant colours in deep reds, purple, gold, or bright pink – colours traditionally worn by Korean royalty. Muted greys and pastels were worn by commoners and peasants, depending on marital status and age; black and white hanboks are rarely worn because of the colours’ association with death.

The exhibition also features over 50 men’s and women’s old-fashioned shoes made by technicians and skilled workers of public tailor’s shops, students and housewives.