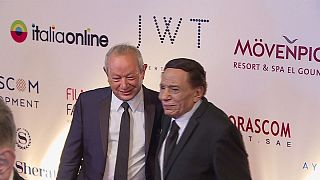 Updated: 24/09/2017
<p>The inaugural edition of the El Gouna Film Festival is underway in the Egyptian Red Sea resort town of El Gouna. It promises to be an annual rendezvous for film professionals and film lovers from Egypt, the Arabic countries, and from all over the world.</p> <p>The festival will present a selection of the newest films from around the globe and host established and emerging filmmakers, according to its website. The program will include three competitive sections (Feature Narrative Competition, Feature Documentary Competition, and Short Films Competition) an Official selection out of competition and a section devoted to special programs. The festival will give special attention to films with humanitarian content.</p> <p>In parallel to the screenings, the festival will organize the “CineGouna platform”, which is a creative and business hub designed to support Egyptian and Arab talents where a wide range of meetings will be organized between Arab and international directors, producers, and distributors with the aim of enhancing business opportunities for the Arab cinema. In addition, the event will present round-tables, workshops, panels, and masterclasses.</p>
no comment