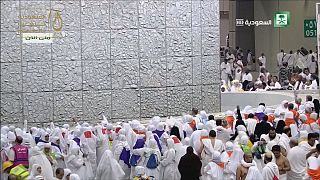 Thousands of Muslims carry out 'stoning of the devil' ritual

Thousands of Muslims carried out the “stoning of the devil” ritual on Friday to mark the beginning of Eid al-Adha celebrations which is the end of the annual haj season.

Pilgrims threw stones at three walls at Jamarat in Mina, in one of the main rituals of the Haj.

The ritual is an emulation of Ibrahim’s stoning of the devil at the three spots where he is said to have appeared trying to dissuade him from obeying God’s order to sacrifice his son, Ismael.

Saudi Arabia said more than 2.3 million pilgrims, most of them from outside Saudi Arabia, had arrived for the five-day ritual, a religious duty once in a lifetime for every able-bodied Muslim who can afford the journey.