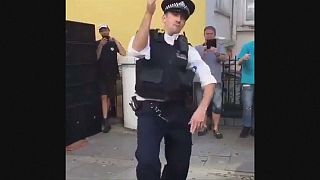 A police officer at Notting Hill Carnival stunned crowds with his dance moves on Sunday (August 27).

Daniel Graham took a moment off from his policing duties to those watching one of the carnival’s DJs, with the MC calling him a “raver in disguise”.

It is not the first time that Graham has earned cheers for his moves, as he reached the semi-finals of the television talent show “Britain’s Got Talent” this summer.

Notting Hill Carnival is a three-day event that celebrates Afro-Caribbean culture and has grown to become Europe’s biggest street festival.