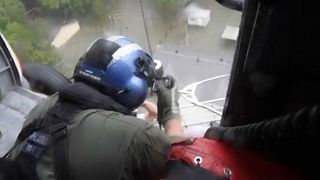 Helicopters racing to get to Texas flooding victims

Helicopter crews are racing to get to stranded victims of the massive flooding in Texas.

US emergency management officials also said on Monday they were committed to getting federal resources to Texas as quickly as possible to help with the flooding caused by Tropical Storm Harvey, with more than 450,000
people likely to seek assistance.

Federal Emergency Management Agency Administrator Brock Long said more than 30,000 people were expected to be placed temporarily in shelters after the storm made landfall over the weekend.

A disaster declaration request from the Louisiana governor would also likely be expedited, he added.