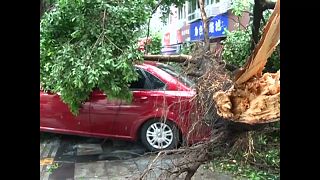 Storms and landslides cause havoc in central and southern China

Much of southwest China has been struck by heavy rain and strong winds that have caused landslides and power cuts.

In a mountainous area of Hubei province around 40 local tourists were taken to safety after becoming stranded on Saturday (July 15). Roads were cut off when rocks and trees came crashing down from the mountainsides.

Further west in Sichuan province, strong winds brought down trees and smashed windows in tall buildings in Mianyang city, according to Chinese television.