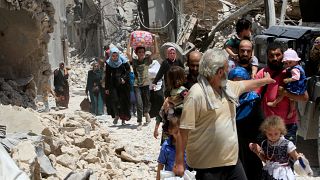 Hundreds of Iraqi civilians fled Mosul on Sunday as airstrikes pounded the last few districts where ISIL militants are dug in.

Many of those escaping were women and children. Some were injured or showed signs of malnutrition.

US-backed Iraqi troops have battled for more than eight months to retake the whole city and, with victory imminent, authorities are planning a week of nationwide celebrations.

Mosul’s fall would mark the effective end of the Iraqi half of the caliphate which the so-called Islamic State group declared three years ago in parts of Iraq and Syria. The group still controls territory west and south of Mosul, where tens of thousands of civilians live.