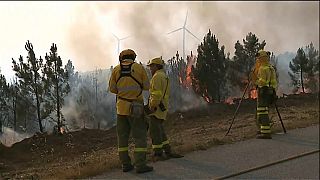 Updated: 22/06/2017
<p>Portugal’s deadly forest fire that killed 64 people and injured more than 150 others last weekend has been brought under control.</p> <p>The Civil Protection agency said the wildfire was extinguished on Wednesday although more than 1000 firefighters backed by 400 fire engines would remain on the scene to prevent it from reigniting. </p> <p>Cooler temperatures and weaker winds also helped firefighters make progress against a nearby wildfire in Gois. About 1,100 firefighters supported by 14 water-dropping aircraft battled the flames.</p> <p>It was the biggest single blaze ever registered in the Iberian country.</p>
no comment