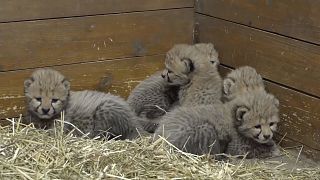 The new arrivals at Prague Zoo are on course to meet their first visitors by the end of the summer.

Video footage shows the group practicing their tiny growls and being checked over by staff.

Their mother, six-year-old Savannah, was originally from Colchester Zoo in the United Kingdom, while their five-year-old father, Ben, came from Denmark’s Ebeltoft.

The Czech zoo has had resident cheetahs since 1933, with the first cubs born there in 1972.

A total of 64 have been born since, including the latest arrivals.