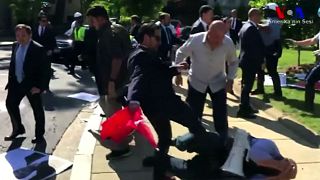 Fighting erupted among protesters on the streets of Washington, DC on Tuesday (May 16), as Turkish President Tayyip Erdogan met with US President Donald Trump at the White house earlier in the day.

The scuffles between protesters outside the Turkish ambassador’s residence resulted in multiple injuries and two arrests – one for aggravated assault and one for assault on a police officer, a city police spokesman said.

The spokesman, officer Hugh Carew, said the origin of the melee was still under investigation. A local NBC television affiliate reported that Erdogan was inside the building at the time.