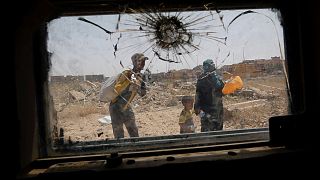 The recent push is part of the attempt to encircle IS in Mosul’s old city.

U.S.-backed Iraqi forces sought to dislodge fighters entrenched in a central mosque before the holy month of Ramadan.

Dozens of civilians were also seen fleeing the areas.