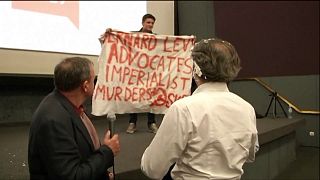 A Serbian activist threw a cream pie in the face of French intellectual Bernard-Henri Levy at a showing of his film ‘Peshmerga’ in the Serbian capital of Belgrade on Wednesday (10 May).

The documentary is about the Kurds’ battle against the Islamic State group. The film is being shown at the Beldocs documentary festival which is celebrating its 10th year.