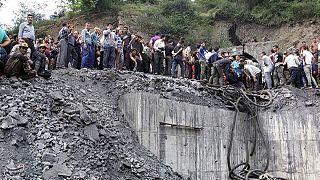 A large explosion struck a coal mine in northern Iran on Wednesday (May, 3), trapping dozens of miners and killing at least two, state media reported.

Ambulances, helicopters and other rescue vehicles raced to the scene in Iran’s northern Golestan province as authorities worked to determine the scale of the emergency.

There was confusion about how many miners might be trapped inside.