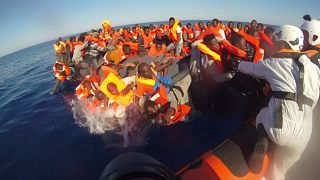 Migrants struggled to stay afloat in the Mediterranean during a rescue operation by the Malta-based Migrant Offshore Aid Station on Friday (April 14), as thousands were plucked from the sea in a single day.

Video footage showed migrants struggling to stay afloat after they slid off their rubber boat during a rescue operation by the Phoenix, a ship operated by MOAS, as rescuers jumped into the waters off the coast of Libya to help them.

An Italian coast guard spokesman said 19 rescue operations by the coast guard or ships operated by non-governmental organisations had saved a total of 2,074 migrants on 16 rubber dinghies and three small wooden boats. The spokesman confirmed one person had died but gave no details.

According to the International Organisation for Migration, nearly 32,000 migrants have arrived in Europe by sea so far this year. More than 650 have died or are missing.