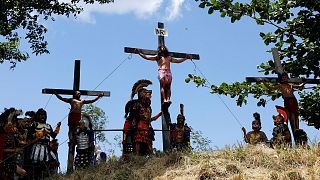 Filipino Catholics crucify themselves in a biblical reenactment

Actors wearing costumes of Roman soldiers attached devotees on the cross by hammering two-inch nails soaked in alcohol through their hands and feet.

Actors playing biblical characters marched to the outskirts of Cutud village, about 80 kilometres (50 miles) north of Manila, and hoisted devotees nailed to wooden crosses under the sweltering noon heat, on Good Friday.

Ruben Enaje, who was nailed to the cross for the 31st consecutive time, said he prayed for those killed by criminals and drug addicts in the country.
He also wished good health to Philippine President Rodrigo Duterte who launched a bloody crackdown on narcotics last year.

The Catholic Church disapproves of the rite that originally started as a small stage play in the 1960s and says it is a “misinterpretation of faith,” but the event has become a popular tourist event.