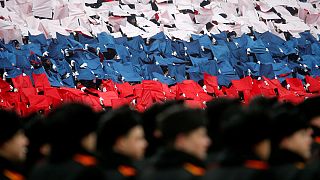 Updated: 08/11/2016
<p>More than 5,000 people marched along Red Square on Monday (November 7) to celebrate the 75th anniversary of the historic military parade held in Moscow on November 7, 1941.</p> <p>The ceremony was attended by <span class="caps">WWII</span> veterans who took part in the legendary parade in 1941, the 1945 Victory Parade, representatives of veterans’ and youth organisations and municipal authorities.</p>
no comment