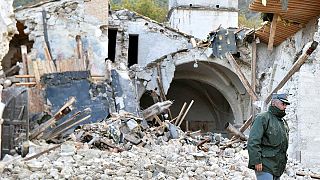 The extent of the damage was starting to emerge on Thursday after two earthquakes struck central Italy, the same region hit by a deadly quake in August.

But the second one a little more than two hours later was eight times stronger at 6.1, according to the US Geological Survey.