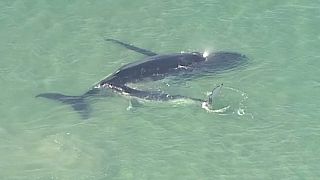 A humpback whale stranded on a sandbank in Queensland, Australia was helped to safety by her calf on Friday morning (October 7).

Footage showed what appears to be the calf repeatedly nudging the mother in an attempt to dislodge her. Local media reported the humpback managed to free herself after being stuck for some 40 minutes.