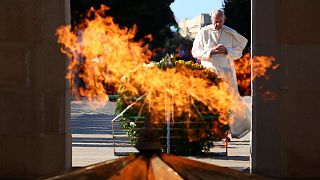 The pontiff made a 10-hour visit aimed at encouraging the country’s multi-faith society but at the same time overlooking recent criticism of a referendum that extends the president’s term and powers.

Azerbaijan, the second-largest Shiite Muslim nation after Iran, has a tiny Catholic population – fewer than 300 Azeris are Catholics.

Francis met with representatives of all the main faiths as well as President Heydar Aliyev before heading back to Rome.