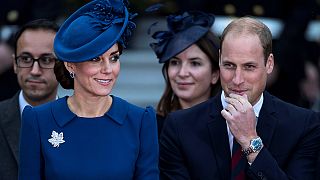 Britain’s Prince William and his wife, Kate Middleton, have begun an official visit to Canada – their first with their children – three-year-old Prince George and one-year-old Princess Charlotte.

William and Kate attended a ceremony at British Columbia’s legislature with full military honours, including a 21-gun salute.

William is the second-in-line to the throne to succeed his grandmother Queen Elizabeth II, who is also Canada’s head of state.