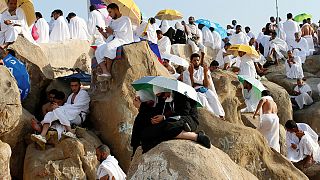 After spending the night in the massive valley of Mina, Hajj pilgrims headed to Mount Arafat on Sunday (11 September), some 20 kilometers (12 miles) east of Mecca, for the pinnacle of the pilgrimage. The Prophet Muhammad is believed to have said that hajj is Arafat, in reference to the day spent there and its importance. Tens of thousands scale a hill called Jabal al-Rahma, or mountain of mercy, in Arafat. It is here where Muhammad delivered his final sermon, calling for equality and for Muslim unity.