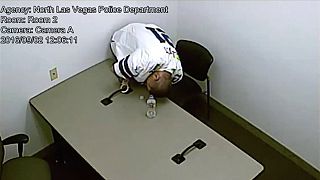 A murder suspect in Las Vegas was caught on camera escaping from police custody by twisting his handcuffs until they broke.

He is then filmed climbing onto a chair, removing a ceiling tile and slipping through the hole, out of the police station interview room, in footage released by police.

Still wearing ankle chains and the broken cuff on his right wrist, Alonso Perez, 25, then allegedly stole a pick-up truck parked outside to make his getaway last Friday.

After four days on the run, Perez was arrested in an apartment not far from where the truck was found abandoned, east of Las Vegas.

Police say he is a suspect in the Aug. 27 shooting death of Mohammed Robinson, 31, outside a McDonald’s restaurant in Las Vegas.