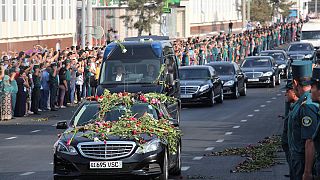 Uzbekistan’s government officially announced on Friday that the 78 year-old leader had died following a stroke and that he would be buried in his hometown of Samarkland.

The veteran leader had run the central Asian nation since 1989 and nearly half of its 32 million citizens were born after he came to power. Many mourners held flowers, mostly red roses, which they laid on the road as the funeral cortege drove by on its way to the airport.