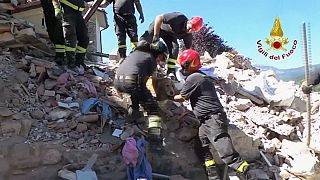 Italy quake: Romeo the dog rescued from the rubble

Fire fighters in Italy rescued a golden retriever named Romeo on Friday after pulling him alive from a pile of rubble more than a week after an earthquake in the centre of the country.

Fire brigade officers had accompanied the dog’s owners to retrieve some of their belongings from their destroyed house when they heard muffled barking. The dog was given water and helped to climb down from the pile of rubble where he was warmly greeted with strokes and pats. Despite his ordeal Romeo ran around wagging his tail and seemed to be in good health.

At least 293 people died when the quake struck on August 24.