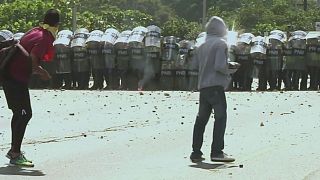 Protesters clash with police in Venezuela

Venezuelan police used tear gas to disperse a crowd of anti government protesters on a highway in Caracas on Thursday. It is unclear what prompted the police response, but some demonstrators were seen throwing rocks.