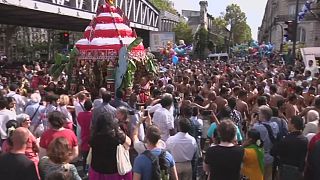 More than 4,000 Hindu devotees and others celebrated the birth of the elephant god Ganesh in Paris as they paraded through the streets of the French capital in a festival held each year for the past 21 years.

As the parade left the temple of Ganesh, devotees made their way through the large crowd, banging on drums and dancing barefoot, some in a state of near trance, as they carried offerings on their shoulders.

The Ganesh Chaturthi is the fourth day of a festival which celebrates the birth of the Hindu god who represents prosperity and good fortune. The celebration traditionally lasts 10 days.